Over the last 2 days i have had the great joy of having my 2 boys by me just about every moment of every day. Jess is getting ready for her first year of Art Exploration Camp, so I have been on major daddy duty. As i should, i want to pause and recognize my wife and all full time moms, and the extraordinary amount of patience they have been given by the Lord. Needless to say over the past 2 days though loving the time with my boys, my ability to extend them the grace they need as a 18month, and 4 year old is something i have to work at constantly, it is definitely not natural.
I want to key in on two moments that have defined all that summer is setting up to be. The first 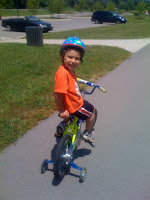 happened yesterday as Justus and I were playing outside, we both
realized my foot was better and it was time for bike riding. So after lunch, the 3 of us (J,N, and me) headed to a park on Concord Rd, to give Justus plenty of room to try out his bike. This was his first real ride since he got his bike for his birthday and it was way over due. Best of all he did great. He was hungry to figure it out, and the land had just enough slope and hill that he had to practice all skills on his bike, but still accomplish a number of small victories on his first try. At one point one of his pedals fell off, and he just laughed it off. Well if you know my head strong, highly emotional son, this too was a big deal he was living in the moment and enjoying the ride. What a great moment we had been blessed with, awesome summer weather. A new bike to break in, even Nate loved it as he giggled on the path as we tried to keep up with Justus while pushed his
stroller. As we headed home, Justus and i decided that we would need to do the bike thing again soon. So today we took the boys and Jess to the park, and he did even better. It is a wild thing to consider all the "rights of passage" my son continues to go through at such a young age. I am so honored to have this time in my life where i can be right there for all of them.
The second moment to mention also occurred at the park today. However it is about another one of my boys Lamar. Lamar has been a student under the ministries i serve in since he was in 6th grade. In a lot of ways. I am as close to a Father as Lamar has truly had. In a sense, our 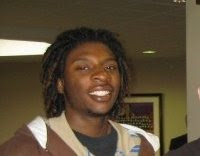 church was his father, i was just one of a few that played the hands and feet, often. Lamar and I have gone everywhere together, camps, mission trips (Africa), ball games, he has grown leaps and bounds in our time together. He is now a 2nd year college student, getting ready to start playing ball for Vol State in Nashville. I began to tell Lamar's story today to a friend that teaches special education at McGavok High. Lamar's story needed to be told to him, to encourage him that some of the at risk kids we run into do make it past age 27 (Ps, that is the national life expectancy of Special Needs (no autism) students in our country, that is not acceptable). Fortunately there are men like Danny willing to pass on a promotion to make sure those kids have a chance. Back to Lamar, he has never known a consistent parent home growing up. By 12 he settled in with his grandparents, and survived that time, graduating from high school and excelling his first year of college. As Lamar continues to find ways to figure out what it means to be a man, i have often prayed for him that the Lord would put together a way for him to spend quality time with other African American couples that are dearly in love with Jesus. Then this summer that opportunity has come together. Lamar has accepted a position with Barefoot Republic this summer, a camp that will have those sort of possible influencers in his life for 6 separate weeks. I am praying that the Lord will bring him some new found wisdom and relationships that will continue him on his amazing path.
Which brings me to summer time. What an amazing time to live, to enjoy the heat and the ability to be outdoors in it. I can't wait to see what the Lord has in store. More to come on this end i am sure....
Posted by Unknown at 9:37 PM

Nicholas enjoys riding his bike as well. We have been enjoying the summer weather. I find putting the boys in the pool in the evening time makes bed time a whole lot easier.